Christmas time, a parasite and wine

That’s right, mistletoe is a parasite. How romantic!

Mistletoe, the staple of Christmas romance, is a parasitic plant with a very specific Christmas list. Once mistletoe seeds have been carried to a host tree by a bird which has eaten mistletoe berries, mistletoe will grow from the seed, invading the tree. Once it has successfully invaded the host tree, mistletoe will steal its nutrients.

The nutrient which tops mistletoe’s Christmas list is nitrogen. Researchers in 1994 discovered that there is a positive correlation between mistletoe species richness and the average nitrogen level of the surrounding plant community. In our last blog we discovered that nitrogen is essential for aiding growth in Christmas trees, and making them lush and green. Perhaps these qualities also make nitrogen such an attractive nutrient to mistletoe.

So why is a parasitic plant which steals nutrients from its hosts considered romantic? One theory centres on the Norse myth involving the death of Baldur (the Norse god of light and joy). Legend has it that when Baldur was killed with an arrow made of mistletoe, the goddess Frigg, his mother, wept over him and her tears turned into white berries on the mistletoe. Frigg then placed these berries into Baldur’s wound, bringing him back to life. Over come with joy that Baldur had come back to life, Frigg blessed the mistletoe plant, promising a kiss to anyone who passes beneath it.

Whether this is the origin of the connection between mistletoe and kissing or not, mistletoe has been linked with human traditions for centuries. Throughout history it has been considered a symbol of life and fertility. In fact, Celtic druids considered mistletoe a symbol of life because it remained green in winter while other plants were bare. However, maybe mistletoe managed to remain green thanks to all of the nitrogen and other nutrients it was leeching from its host plants.

So, if you are caught for a kiss underneath the mistletoe maybe you’ll think of Frigg’s promise of a kiss and bestow one on your admirer. If not, you can always distract them by telling them that mistletoe is a parasite. For good measure, you can throw in that it’s also toxic to humans. Let’s face it, poison isn’t that romantic. 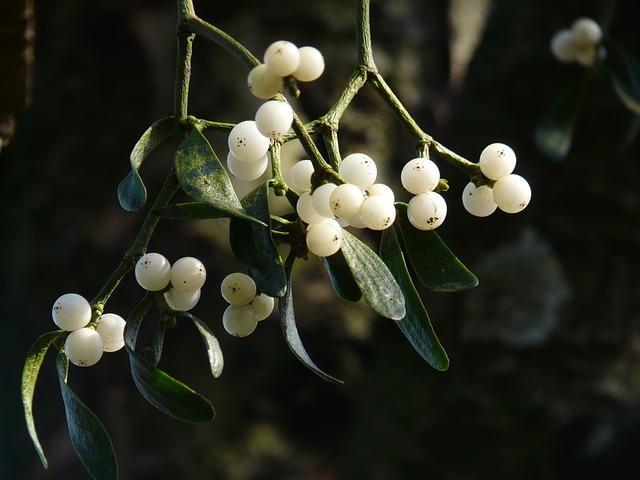 Mistletoe is a parasite which sucks nutrients, such as nitrogen, from its host

Rockin' around the Christmas tree thanks to nitrogen

Christmas baubles, lights and a star can make a tree look great at Christmas, but it’s…

Why is nitrogen used in fireworks?

Fireworks contain many different chemicals and often nitrogen is one of them. Read on to discover…